After playing a key role as a reliever throughout last year’s season, Maroon of the Month Carter Schierbrock stepped into a different role this season. In Moline’s second game of the season, Schierbrock was given the start against St. Louis Marquette, a top 10 team in Missouri. He threw 5 shutout innings to claim an 8-0 victory, which earned Schierbrock the Dispatch-Argus-QCOnline metro pacesetter of the week.

Schierbrock’s ability on the mound was key in the Maroons’ last conference game of the season against Galesburg. He pitched all seven scoreless innings with no walks and only five hits against him. His outstanding performance secured a share of the WB6 title with Alleman. Schierbrock says, “Winning the Western Big 6 was a fun experience and a blast to be a part of.”

The other Maroon of the Month, Becca Barnett, made a huge transition to Moline after attending Alleman High School the past three years. On her move, she says, “I like the people here better, and I fit in really well with my teammates.” In addition, Barnett committed to Drake University to continue playing softball next season.

Last season, Barnett was selected All-Metro and Western Big 6 All-Conference with a .410 batting average. However, this year, she is currently leading the conference in batting average, on base percentage, and base hits. She plays a major role as the Maroons’ shortstop and lead-off hitter. 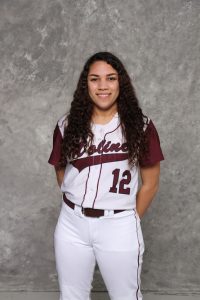 The Maroons finished the Western Big 6 at 4-6, but they are hopeful going into the postseason. Barnett explains, “We’re all really excited that we get to host regionals this year. It will give us a home-field advantage against our competition.” The team also hopes their off-field chemistry will give them the push they need. Barnett credits the friendships between Becca and her teammates for the fun they have had this season. She exclaims, “My favorite memory from this year is playing hacky sack with my teammates.”